Katalin Karikó, when passion for science and perseverance pay off

In 2021, the field of nanomedicine has seen a real upheaval with the development of mRNA vaccines against SARS-CoV-2, the only positive note in this pandemic.

Time for us to pay tribute to Prof Katalin Karikó, a great scientist who honored us with her presence in 2017 at a Summer school (from June 7 to 9, hotel Mercure in the La Grande-Motte beach resort) dedicated to Nucleic acids-based strategies to control gene expression: principles, applications in biology, clinical translation and delivery issues » (https://sfnano.fr/2017/09/01/ecole-dete-2017/). Our acknowledgement to Prof Bernard Lebleu, an eminent board member of SFNano, who invited her to be part of the Summer School. She gave us a great lecture explaining how important the presence of modified nucleosides for mRNA therapeutics applications is.

Katalin Karikó received her Ph.D in Biochemistry in 1982 from the University of Szeged (Hungary) and migrated to US for her post-doctoral training. She struggled to get grants on mRNA therapeutics and a professorship position due to skepticism about the future of mRNA-based therapy at that time. Fortunately, she met Prof Drew Weissman (University of Pennsylvania, Philadelphia, USA) and their collaborative work has been fruitful. Despite years of challenges and setbacks, Prof. Karikó passionately persevered her pioneering work in advancing their work on mRNA. She joined BioNTech in 2013 and serves now the role of Senior Vice President RNA Pharmaceuticals in addition to be Professor at University of Szeged and as an Adjunct Professor at the Perelman School of Medicine, University of Pennsylvania.

In the 1990s, few scientists started to apply in vitro-transcribed (IVT) mRNA to express a therapeutic protein. IVT mRNA was first injected into mice muscles in 1990 with the vision of using it for the production of a protein in vivo (Wolff et al., 1990. Science 247, 1465-68). However, the low translation level and the highly inflammatory nature of IVT mRNA were real issues for its application. Nevertheless, it is clear that the immune stimulating properties of mRNA could be of benefit for immunotherapy. In 2000, Prof Katalin Karikó made a significant contribution to the research field when she started to study the mechanisms behind the inflammatory activity of IVT mRNA leading to its low translation. At the University of Pennsylvania, she and Prof Weissman (University of Pennsylvania, USA) assessed the effect of RNAs isolated from different intracellular compartments of mammalian cells on the activation of immune cells. They found that transfer RNAs (tRNAs), which contain many modified nucleosides were non-immunogenic whilst mitochondria’s RNA sharing common features with bacterial RNAs were very inflammatory. Interestingly, mature mRNAs produced by mammalian cells that contain modified nucleosides, are less inflammatory. Karikó and Weissman hypothesized that nucleoside-modification of RNA would be the key to avoid the activation of RNA sensors. They identified, that innate immune receptors, including TLR3, TLR7 and TLR8 are responsible for the immunogenicity of the transfected IVT mRNA. In their seminal 2005 work, they reported their ground-breaking findings that replacement of one or more of the nucleosides with naturally-occurring modified versions during the in vitro transcription reduced the inflammatory potential of the produced mRNA, by preventing activation of TLR7 and TLR8 (Karikó et al., 2005. Immunity 23:165-175). They identified uridine as one of the nucleosides responsible for this activation. Next, they demonstrated that exchanging uridine with pseudouridine during IVT process, leads to non-inflammatory transcripts that translate very efficiently upon transfection. This modified mRNA version does not alert the immune defense once delivered inside the immune cell.

Following the seminal discovery of Karikó and Weissman, some researchers could see the potentiality of this modified RNA through different applications. In 2010, another seminal work on the generation of induced pluripotent stem cells from Derrick Rossi, cofounder of Moderna (ModeRNA stands for Modified RNA) was published showing the essential role of nucleoside modification of the RNA molecule for this biotech company (Warren et al. Cell Stem Cell. 2010. 7: 618–630).

In 2011, Karikó et al., found that removing contaminating double-stranded byproducts from the IVT process further increased mRNA translational efficacy by avoiding activation of immune sensors and effectors (Karikó et al., 2011. Nucleic Acids Res. 39: e142). Clearly, the combination of modified nucleosides and the successive removal of byproducts from IVT reaction has led to the production of synthetic mRNAs with high translation efficiency and low inflammatory potential. These two processes are very important cornerstones for the exploitation of these mRNAs for vaccination and for therapy. In 2016, the University of Pennsylvania exclusively licensed mRNA patents and applications (US8278036 & US8748089) to CellScript). CellScript further entered into worldwide sublicenses in 2017 with Moderna and with BioNTech. Moderna sublicense agreement does explain that they relate to “technology developed by Katalin Karikó and Drew Weissman.

The pioneering work of Prof Karikó and Prof. Weissman paved the way for the use of nucleoside-modified mRNAs in COVID-19 vaccines. Amongst the huge number of vaccines against SARS-CoV-2 that have been developed, BNT162b2 (BioNTech, Fosun Pharma, Pfizer) and mRNA-1273 (Moderna) both made with nucleoside-modified mRNA encapsulated in lipid nanoparticles (LNP) achieved an incredible 95% efficacy in clinical trials and getting regulatory approval to go on to become the world’s leading vaccines. It is impressive to see that those vaccines have a high efficiency against variants as well. Despite some cautions that must be taken due to the difficulty of making a direct comparison because of differences in doses, one must point out that the 1st generation of mRNA vaccine developed by Curevac produced with an optimized sequence of mRNA but without modified nucleosides did not reach the expectation.

Knowing the impact of modified nucleosides to improve the mRNA expression, Katalin Karikó truly deserves to be considered as the pioneer of the mRNA discovery that underpin mRNA-based COVID-19 vaccines. The discovery has a profound humanitarian significance with a direct impact on global society. The modified mRNA offers not just a chance to stanch a global pandemic but also a promising new platform to tackle different pathologies. Multiple therapeutic uses of nucleoside-modified mRNA have been developed, including producing neutralizing monoclonal antibodies, cytokine/chemokine to stimulate curative immune responses, production of CAR T or CAR NK cells, cell reprogramming, potential to treat autoimmune diseases, congenital disorders and improve bone regeneration. For gene editing purpose, one can cite the use of nucleoside-modified mRNA encoding Cas9 in clinical trial for treatment of ATTR amyloidosis. The treatment achieved a lifelong genetic change in the liver by reducing the amyloidogenic protein circulating levels.

The scientific achievements of Prof Karikó prove once more that applied research unravels the knowledge gained from basic research in the hope of using it for specific purposes, such as new drugs and treatments. The collaboration between disciplines (biochemistry, immunology, nanomedicine …) has allowed the development of mRNA therapeutic platform. The open-mindedness of the hundreds of scientists around the world, who have taken an interest in mRNA, has made the blooming of this new therapeutic modality confirming once more that science without borders is a real source of innovation.

These last two years, the scientific achievements of Katalin Karikó started to be acknowledged and she received different awards for her pioneering work as Rosenstiel Award (2020), Princess of Asturias Award (2021), Horwitz Prize (2021), the Grande Médaille de l’Académie des sciences française (2021) and 2021 Lasker award. The Vilcek Foundation made the decision to announce the recipient of the 2022 Vilcek Prize for Excellence in advance to recognize the profound impact of Karikó‘s work on mRNA vaccines as an immigrant scientist. Last, Katalin Kariko has been nominated as foreign member of the French academia of sciences.

To conclude, the seminal work of Katalin Karikó is one of crucial milestones that has permitted the development of COVID-19 mRNA-based vaccines. Katalin Karikó is not only a great researcher with rigor and passion but is also humble, approachable and always ready to encourage the younger ones. Her eagerness and passion in science has led to new developments despite the skeptical attitude towards ideas that she has had to face on. The last words will be those she gave to me and I guess to other scientists: “Never discouraged when you fail, work even harder, do it better and reinvent yourself”.

Thank you so much Prof Karikó for being a role model for all of us, as an immigrant woman scientist, your recognition means a lot these days! 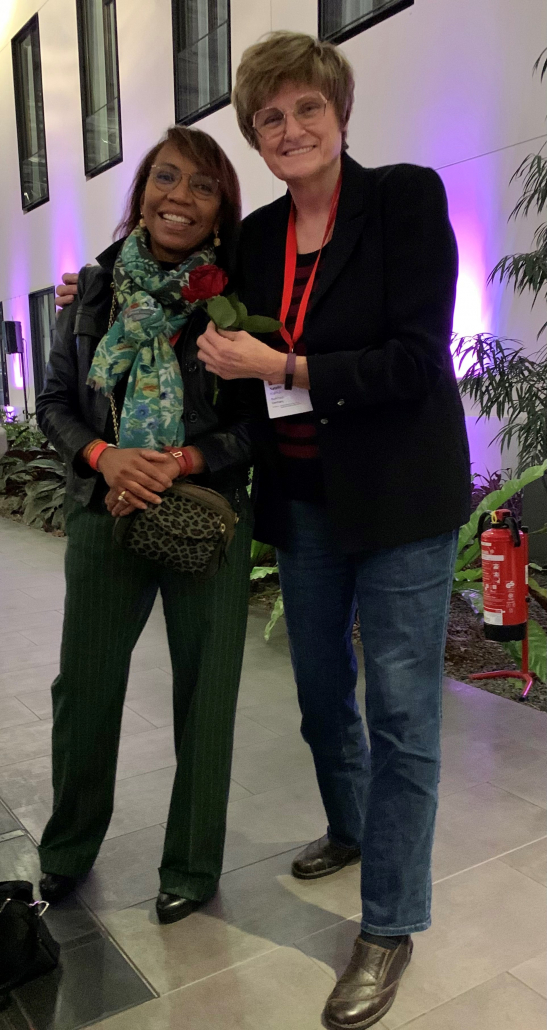